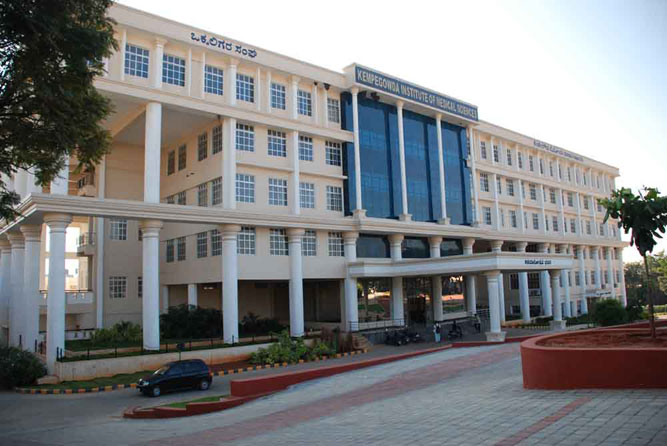 Kempegowda Institute of Medical Sciences was established in the year 1980 by the Vokkaligara Sangha and is affiliated to Rajiv Gandhi University of Health Sciences, Bangalore, Karnataka.

The Vokkaligara Sangha took a formal decision on 2.9.1979 to start a medical college from the year 1980-81 and applied for permission to the Registrar, Bangalore University.
On 30.11.1980 the Hon’ble Chief Minister Shri. R Gundu Rao laid the foundation stone of the Kempegowda Institute of Medical Sciences and Hospital in the premises of the Sangha and announced the grant of vacant land in Banashankari to be used for the construction of college building and hostels. Thereafter, the Sangha appointed Dr M Basavaraju, Professor of Physiology as the principal on 1.1.1981 and other staff by March 1981 and classes were started regularly from the 16th of March 1981. Since then 16th March is observed every year as KIMS Day. The Silver Jubilee Celebrations of the Institute was held in the year 2006.
A Magnificent college building to mark the centenary celebrations of the Vokkaligara Sangha and the Silver Jubilee of KIMS has been built at the Banashankari Campus.