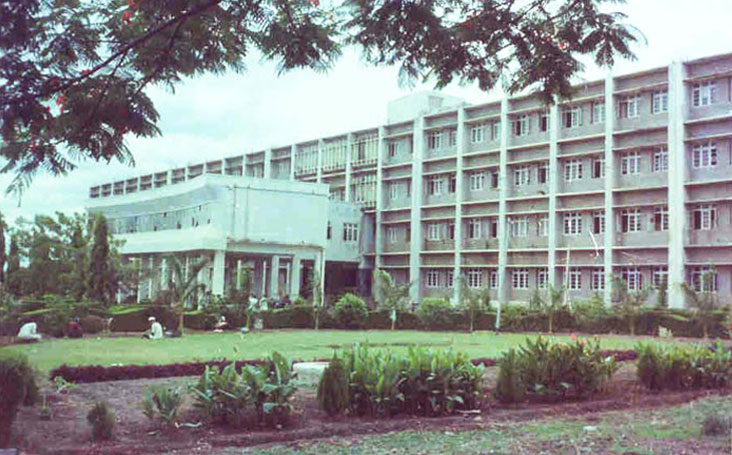 The Government of Karnataka had decided to establish a Medical College at Bellary instead of Gulbarga. Hyderabad Karnataka Education Society under the leadership of Sri Mahadevappa Rampure started a Medical College in Private sector in 1963. Sri S. Nijalingappa, the then Chief Minister, Govt. of Karnataka, Sri. Veerendra Patil and Dr. D. C. Pavate helped in establishing the Medical college.

Medical College was started in 1963 with mission to bring out quality doctors by imparting quality education to meet the present and changing expectation of the people and improving the health status of the people of this region by offering health care and providing optimum training facilities for Medical students.

Initially clinical training was given in the Govt. District Hospital (Present District Health Office) on the Main road, which was having a very small space. Looking at the needs of the college & due to keen interest shown by the then PWD minister Sri. Veerendra Patil, Government started the construction of a 850 bedded hospital on Sedam road.

The hospital was ready in January 1967. The clinical training was shifted to the present District General Hospital.

The College runs the Post Graduate Courses in Preclinical Subjects: Anatomy, Physiology and Biochemistry. Paraclinical Subjects: Pathology, Pharmacology, Microbiology, Forensic Medicine and Community Medicine. And Clinical Subjects: Medicine, Paediatrics, Dermatology, Surgery, Orthopedics, ENT, Ophthalmology, Radiodiagnosis, Anaesthesia, Obstetrics and Gynecology. The College got recognition to all its post-graduate courses by the Medical Council of India. The courses have been started in the subject of Anatomy, Physiology, Biochemistry and Microbiology under the RGUHS in 2008.

To improve the health status of the people of this region by offering quality health care and to provide optimum training facilities for Medical students it was decided to start its own hospital for teaching purpose, the land for which was selected near to the college on Sedam Road. Basaveshwara Hospital was given was a silver jubilee gift to the college in 1989. Its foundation stone was laid by Sri R Venkataram, the then Vice President of India in 1983.

It is built as super specialty hospital and was inaugurated by late Sri Rajiv Gandhi, the then Prime Minister of India

Sangmeshwara hospital was added in nineties to the college. The Medical Council insisted that the College must have its own hospital for teaching purpose. Accordingly bed strength of Basaveshwar Hospital was increased to 765 and the Government General Hospital used for teaching purposes from the beginning of the College was discontinued from 2005. Then onwards all the clinical teaching activity is being carried in Basaveshwar and Sangameshwar Hospitals.

Currently the college offers the basic undergraduate degree of MBBS and postgraduate degree and diploma degree in 18 subjects. There are 250 well trained & experienced staff.

M.R. Medical College is a four storyed building covering 120,000 square feet area and houses various pre and para clinical departments and also department of Medical Education. Emphasis in all the departments is on applied and Clinical aspects of subjects and all Departments of Anatomy, Physiology, Biochemistry, Pathology, Microbiology, Pharmacology, Forensic Medicine are geared to provide hospital services besides teaching and research. Each department is well equipped with modern equipments.